The Masai Mara National Reserve is Kenya’s finest wildlife reserve. Everything about this reserve is outstanding. The wildlife is abundant and the gentle rolling grasslands ensure that animals are never out of sight. Birds, too, are prolific. Including migrants, well over 450 species have been recorded, among them, 57 species of birds of prey. The climate is gentle, rarely too hot and well-spread rainfall year round. Rain, when it falls almost always chooses the late afternoon or night. Between July and October, when the great wildebeest migration is in the Masai Mara National Reserve, the sensation is unparalleled. Masai Mara is one of the best plains’ game reserve where you can actually encounter a live Discovery Channel, a haven for viewing a congregation of all sorts of animals in a five-mile radius: A pride of lions can be spotted ready to make a run for a gazelle (actually, the last time we visited the Masai Mara we saw a lioness take down a giraffe), a cheetah and its cub taking a nap on a rock, a pair of ostriches walking the open stretches of the savannah or a gazelle giving birth (we saw this too).

The Masai Mara National Reserve lies about 270 kilometers from Nairobi, and takes about 4 to 5 hours by road. There are scheduled flights, twice daily from Wilson Airport Nairobi, which take about 40 – 45 minutes. The reserve is about 1510 square kilometers having been reduced from 1672 square kilometers in 1984. However, the wildlife is far from being confined within the reserve boundaries, and an even larger area, generally referred to as the “dispersal area” extends north and east of the Masai Mara National Reserve. Maasai communities live within the dispersal area with their stock but a century of close association with the wildlife has resulted in an almost symbiotic relationship where wildlife and people live in peace with one another. The first sight of this natural wonderland is breathtaking. Here the great herds of shuffling elephants browse among the rich tree-studded grasslands with an occasional sighting of a solitary and ill-tempered rhino.

Thomson’s and Grant’s gazelle, Topi and Eland and many more species of plains’ game offer a rich choice of food for the dominant predators; lion, leopard and cheetah which hunt in this pristine wilderness. In the Mara River, hippo submerges at the approach of a vehicle only to surface seconds later to snort and grumble their displeasure. Seemingly, the drowsy crocodile sunbathe on the riverbanks, mouth agape, waiting with subtle cunning for prey at which to strike with lightning swiftness. But this richness of fauna, this profusion of winged beauty and the untouched fragility of the landscape, are all subordinate to the Mara’s foremost attraction, the march of the wildebeest.

Each year, far south in the great vastness of the Serengeti, the wildebeest raise their dignified but quaint heads, sniff the air and, as if by one accord, start the long trek to the Kenya border and the Masai Mara National Reserve. After exhausting the grazing in Tanzania’s northern Serengeti, a large number of wildebeest and zebra enter the Masai Mara National Reserve around the end of June drawn by the sweet grass raised by the long rains of April and May. It is estimated that more than half a million wildebeest enter the Masai Mara National Reserve and are joined by another 100,000 from the Loita Hills east of the Masai Mara. Driving in the midst of these great herds is an unimaginable experience. Whilst the eyes feast on the spectacle, the air carries the smells, the dust and the sounds of hundreds of thousands of animals. There is nowhere else on earth to compare with this wildlife marvel. But the trek is costly. The herds’ draw ravening packs of predators, especially hyenas and lions, and thousands of the lame, laggard and sick never complete the cycle. More die, by drowning or by the teeth of the cunning crocodile, while trying to cross the swirling muddy waters of the Mara and Talek rivers. Once the Masai Mara National Reserve’s grass has been devoured and when fresh rain in Tanzania has brought forth a new flush there, the herds turn south, heading hundreds of kilometers back to Serengeti and the Ngorongoro plains. There the young are dropped in time to grow sufficiently strong to undertake the long march north six months later.

Although July, August and September are the months when the Masai Mara plains are filled with migrating wildebeest and zebra, there is much resident wildlife year round. Apart from the better-known species there are numerous opportunities to add some of the rare and less frequently seen animals to the visitor’s checklist. In the southwestern sector, you may be lucky enough to see roan antelope, a handsome creature regrettably rare countrywide. Bat-eared foxes peer from their burrows and there are thousands of topi, an antelope not found in other major parks save Tsavo National Park. The combination of a gentle climate, scenic splendor and untold numbers of wildlife makes the Masai Mara Kenya’s most popular inland destination park. 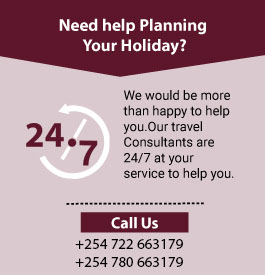